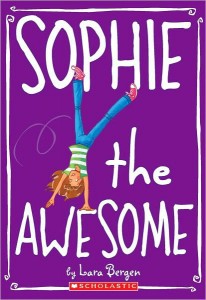 There are plenty of awesome things in this world, and Sophie H. Miller (H stands for Hamm—it really does!) just may be the most awesome of them all.

Sophie wasn’t always so awesome, though. She started out pretty much like the rest of the third-graders in her class; tall, gangly, a tad bit sassy, and missing the appropriate number of teeth. In fact, Sophie was so ordinary, she dreamed of being different.

In Sophie the Awesome, by Lara Bergen, Sophie chooses an awesome title that is sure to make her stand out from the rest of her friends. She declares herself Sophie the Awesome, then proudly waits for her friends to applaud her awesomeness. But Sophie soon realizes she can’t make such a claim without backing it up, so she sets out to prove to friends (and enemies) that she is worthy of carrying such an awesome title.

Sophie tries all sorts of things to prove her awesomeness, including breaking the latest jump-rope record and stuffing her mouth with French fries until her jaws won’t shut and she drools on her chin. Nothing works, until something awful happens and Sophie springs into action to help a friend.

Your little hero is sure to love Sophie’s zany adventures. Sophie the Awesome is one of a four-book series about the absolutely awesome adventures of an un-ordinary girl. It’s lively, humorous, and just right for middle grade girls looking for their next funny heroine. In addition, artist Laura Tallardy makes the book even funnier by providing illustrations that are spot on, right down to the last hilarious facial expression.

For laugh-out-loud fun that’s nothing short of awesome, be sure to read Sophie the Awesome.