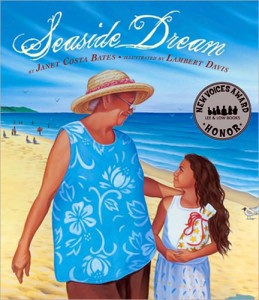 It’s not often one gets to read a great story, peruse beautiful pictures and learn new vocabulary in the process. But when readers choose Seaside Dream, the New Voices Award Honor book by author Janet Costa Bates, they get all three.

Seaside Dream is the story of young Cora, who struggles to think of an appropriate gift for her grandmother’s 70th birthday. Aunts, uncles, cousins and friends stream into Grandma’s beautiful home from everywhere–including across country, and Cora enjoys the family-reunion-like atmosphere as they load the tables with brightly-wrapped presents and prepare delicious Cape Verdean food for Grandma’s birthday supper.

Cora gets to sample a delicious stew-like dish that one relative calls kachupa, and another relative insists is called MUNchupa. Then Cora walks along a beautiful beach in the moonlight with Grandma, and listens to her talk about her sister Aura, who chose to stay in the Old Country while the rest of the Cape Verdean family settled in America.

Cora learns about her Cape Verdean roots, and how Cape Verde had once been plagued with drought, so that no food would grow and the people starved. Grandma and most of the family fled their beloved Cape Verde and came to America, but Aunt Aura stayed behind, in the only home she had ever known.

After their walk, Cora falls asleep and dreams that Aunt Aura sends Grandma a message in a bottle. When she awakes, Cora knows the perfect gift for her grandmother’s birthday: Her sister, Aura!

Seaside Dream is a quiet and lovely multicultural picture book with soft, sleepy illustrations by artist Lambert Davis that give readers a wonderful glimpse of Cape Verde fashions and Cape Verde facial features and expressions. The setting is authentic, the voice rings true, and the situation–a young girl struggling to think of a gift for the older relative who has everything–is all too realistic.

With its short glossary at the beginning of the book and its slightly longer Cape Verde history at the back, this light-weight, sturdily-bound hardback book makes the perfect addition to any public or private multicultural library.

Five stars! To order your copy, click on the icon to the right.