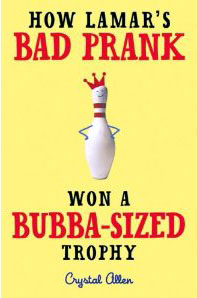 Bet you’re wondering how a book without pictures has managed to land on a website devoted to books with pictures.

Well…How Lamar’s Bad Prank Won a Bubba-Sized Trophy is just one of those books. It is…gasp, pictureless, but it’s so wonderful, it doesn’t need them to be featured here. It’s so funny and well-written, you won’t be able to put it down. Really! So it is with a chest-full of pride and admiration that I present this hilarious, “pictureless,” cream-cheese-filled debut book by talented African American author Crystal Allen!

Allen’s first novel has everything a ‘tween or teen could want in great reading: Humor, sadness, sibling smack-downs, sports…and a healthy dose of lip-smacking lip-action underneath the middle-school bleachers.

The book opens to Lamar falling—hard—for pretty Makeda Phillips. Unfortunately, Makeda doesn’t take Lamar seriously, because last year, Lamar and his best friend Sergio said Makeda’s forehead was so big, it was actually a “five-head!” The joke seemed harmless at the time, but when Lamar realizes how much his words have hurt Makeda, it’s not funny anymore. Now all he wants is to change his image from prankster to potential boyfriend.

To undo the damage, Lamar tries to show Makeda his serious side. That’s not easy to do without money, though, so when resident bad-boy Billy Jenks devises a bowling scheme to make fast money, Lamar—the hottest bowler at Striker’s Bowling Paradise—is all for it. The money is so good, Lamar even feels better about the fact that he’s never won a trophy to place on the mantel, like his trophy-winning brother, Xavier the Basketball Savior.

Things go so well, Lamar ignores Sergio’s warnings about Billy’s dangerous side. Then things suddenly go sour. With Billy egging him on, Lamar pulls the worst prank ever. In a flash, his brother’s scholarship is in jeopardy, Makeda wants to break up, Sergio isn’t speaking to him, and the whole town thinks he’s a jerk.

How’s that for excitement?

Allen’s characters are well-rounded and believable enough to make you laugh, cry and keep flipping those pages until the story is done. The pacing is good, the plot and sub-plots are fresh and meticulously-written, and the voices ring with authenticity. I especially love the warm and fuzzy images Allen weaves throughout the story: Grannies nodding off in their rocking chairs on the porch; bowling balls making their unique thunder-rumble as they roll down the lanes and topple the pins; and fathers working so many hours, they don’t see what’s going on right under their noses.

For a touch of the sentimental and a giant glob of laugh-out-loud, be sure to read, How Lamar’s Bad Prank Won a Bubba-sized Trophy. Just click on the icon above and reserve your copy.