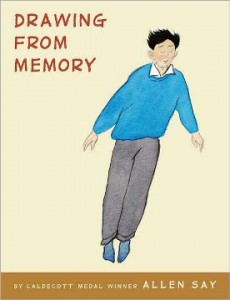 Drawing from Memory, by author/illustrator Allen Say, crosses several genres to offer the very best picture book elements for your viewing pleasure. This part history book, part biography, and part graphic novel tells the riveting story of young Allen Say, who began life in a modest Japanese fishing village and ultimately won the Caldecott and the Boston Globe-Horn Book Award, and penned the famed, Under the Cherry Blossom Tree.

Because Say’s mother was terrified he would drown in the fishing waters, she taught him to read comic books before he even started school. This occupied his time, kept him away from the water, and made him popular among the neighborhood children. But it also fired his imagination, and he soon dreamed of becoming an artist. Instead of studying, Say doodled nonstop or scribbled impulsively on the walls, infuriating his parents. Their stinging reprimands gave him his first taste of shame for wanting to be artist.

After the Japanese bombed Pearl Harbor, Say bounced around to different locations. He and his mother and sister left the fishing village and moved to the city, and later, he lived with a grumpy grandmother who promised him his own apartment if he would only stop drawing and study harder. He got his apartment, but instead of studying, he became the protégé of Noro Shinpei, Japan’s leading cartoonist. With Shinpei’s guidance, Say honed his craft and became quite a talent to reckon with.

But the depth of Say’s talent was not truly known until after he headed to America as an adult. There, with nothing but his memory, Say recreated village scenes, schoolyard friends, American soldiers stationed in Japan, and even a drawing of Noro Shinpei’s first wife, who died without leaving any pictures of herself behind. That particular drawing was a source of joy for Shinpei’s two daughters, who were so young when their mother died, they had no memory of her. Say gave them a great gift!

This wonderful book has all the elements that make it a truly human experience: There’s laughter, sadness, beauty, war, fear, courage, and even young love. Say’s writing style leans more toward the factual than the lyrical, but still manages to brim with warmth and excitement. And while his artistic style is not Michaelangelo, Say’s drawings are quite moving, and true enough to stand-alone, if need be.

For a wonderful read full of courage, culture and adventure, be sure to read Drawing from Memory by Allen Say.