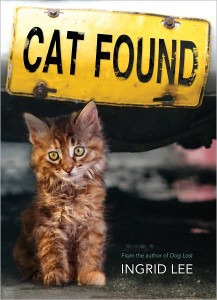 Cat Found is a book about a cat named Conga who was found by a boy named Billy. Poor Conga had been living in an alley after being injured. Her paw was hurt, and she was barely alive when Billy found her. Billy wasn’t sure how Conga got hurt, so he took her to an animal shelter. But the animal shelter was over-crowded, and there was no room for her there. That meant the people at the shelter would have to kill Conga, and Billy did not want that. So, Billy decided to take her home and care for her.

Billy was excited about having a cat of his own, but he had to hide Conga because his father did not like cats at all. It took a while for Conga to get better, but Billy kept trying until he finally nursed her back to health. Then, one day, Billy got a big surprise. Conga was going to be a mother! Soon, Conga had three small fluffy kittens. Billy tried to make Conga and her kittens a small house, but they ran off in the cold night. The people in Billy’s town didn’t like the cats, and wanted to get rid them. They were mean to them, throwing rocks at them and even trying to shoot them. The people in the community complained to the Mayor so much that he decided to get rid of all the cats in the town.

After some townsmen tried to kill Conga, Billy realized he could no longer hide her. He finally had to tell his father about her. The Mayor was torn between the townspeople and didn’t know what to do. All he knew was he wanted to be reelected next year. Then Billy and his friends came together with a great solution to the problem, and went to convince the Mayor to build homes for the cats. I won’t tell you what the Mayor did, but I will tell you that those cats finally had a home of their very own.

Cat Found is a great book, and I really liked it. The people seemed very real to me. My favorite part of all was when Billy first met Conga and took care of her. I felt like this book was written for me.

I give this book 5 stars.

When the Wind Blew

Why Did the Farmer Cross the Road?