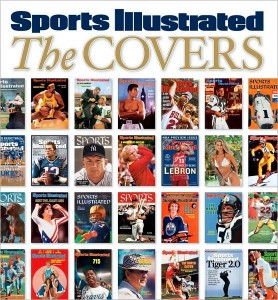 When I was first asked to review Sports Illustrated: The Covers, I knew just how I would proceed. It was a book about covers, right? So what was there to review? I would just flip through the pages, comment on their historical content, write a line or two about the evolution of photography through the SI lens, then be on my merry way.

The moment I turned the first page, I knew this was more than just a book about sports covers. Now, I know what you’re thinking; you’re thinking, “Sure. Just like Playboy is more than just a magazine with naked women…it has great articles too.” [wink, wink]. But it’s true: This latest book by the Editors of Sports Illustrated is like a light under a barrel; it’ll shine for you if you only lift the cover and give it a chance.

For myself, I was hooked after reading the first few pages and learning about the SI “jinx.” Apparently SI covers not only make instant icons, they also destroy promising careers at random. The first victim was skier Jill Kinmon, who made the cover then crashed into a tree and became paralyzed while the issue was still on the stand. Then there was racer Pat O’Conner, who died in a 15-car pile-up only a year after his cover ran. Another victim, 15-year old figure skater Laurence Owen, died in a plane crash a week after her cover ran. Gripping stuff, huh? But of course not everybody died: When SI billed Curt Flood (St. Louis Cardinals) as “Baseball’s Finest Centerfield,” the jinx pounced on his head and he ended up at 0 for 14 before missing five games due to an injury.

Thankfully, Sports Illustrated: The Covers, has more to offer than just “jinx” statistics. There is a staggering array of other statistics, including ranking athletes by the number of times they graced the covers (i.e., Michael Jordan – 49; Muhammad Ali – 38; etc.), and ranking those outstanding athletes who racked up wins but still never made the cover (i.e., Annika Sorenstam, who won 72 PGA tour events and 10 major championships, but…no cover). The book is also chocked-full of charts, like the “Decade at a Glance” chart, the “College Ranking” chart, the “Most Appearances by Teams,” chart, and the “Swimsuit” chart, to name a few.

For variety, there is a section on a sports enthusiast named Scott Smith, who began collecting Sports Illustrated issues at age 13. Smith has garnered precious autographs on 2,657 of the 2,853 issues with humans on the cover, and his collection is valued at over $1 million dollars!

Sports Illustrated: The Covers is a BIG book (11.9 x 11.1, and 208 pages), and it’s heavy, too. But it is bound well, has a beautiful jacket cover, and is made to last. It has to be, since it contains thousands of covers dating all the way back to its debut on Aug. 16, 1954. The covers are in chronological order and tell the history and evolution of Sports Illustrated, from its earlier more simplistic production days to its current format of jaw-dropping action shots and various photo insets. In essence, this magazine, which is deemed to have published “more fine art than any periodical in the country,” offers readers 56 years of American history at a glance, proving beyond a shadow of a doubt that EVERYBODY LOVES A GOOD PICTURE BOOK! Few if any other magazines can make such a claim.

I could sing this book’s praises all day, but since I have to stop somewhere, I’ll leave you with this: As an African American, I am very impressed with this collection of covers, and with Sports Illustrated magazine itself. Why? Because SI has been covering the lives and talents of African American athletes as far back as the 1950’s and 1960’s—a shameful period when segregation was a way of life. This coverage is proof that SI was (and still is) “liberal and fair,” and as such, is (and was) years ahead of its time.

How I wish I could offer Sports Illustrated some sort of medal for its great work, but I read somewhere that this magazine has already won the National Magazine Awards for General Excellence in 1989 and 1990—the publishing industry’s highest award. So what in the world could I possibly give this magazine that would equal that?

Wait, I know! I can give them…five stars.