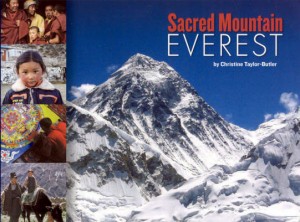 Sacred Mountain Everest, by Christine Taylor-Butler, is a dashing book that celebrates all things Everest. It has more unique features than can be listed in this humble review, but the most striking of all is its focus on the many lives that Everest has touched, not just the lives it has taken.

Taylor-Butler begins with a long overdue lesson on the lives of the Sherpa, a gentle and unassuming people with a unique ability to adapt to Everest’s harsh climate and rugged lifestyle. She offers a compassionate description of their lives, their beliefs and their activities; she even touches on current efforts to improve their futures, including scholarships for their education and donations to raise awareness about Sherpa history and culture.

This book is brimming with juicy tidbits, like how the Sherpa say the days of the week in their language; how the Himalayas were formed; how Everest was first measured; and how the mountain was named, including a historical photo of its namesake, Sir George Everest. Taylor-Butler even includes a mysterious photo of the footprint left by that elusive creature many people called “the abominable snow man,” which appeared on Everest in 1951.

This is one of the most delightful, most meticulously-written books I’ve read in a long time. Every conceivable topic is covered, then backed with carefully chosen black-and-white and color photographs. There is even a section on Tenzing Norgay, a Sherpa guide who saved the life of mountain climber Edmund Hillary, and later made history with him when they became the first humans known to have set foot on the top of Mount Everest. And there’s more: Taylor-Butler includes a side bar update on Tenzing Norgay’s sons!

If you’re looking for the perfect inspiration for that future mountain climber in your home or classroom, Sacred Mountain Everest is the book for you.