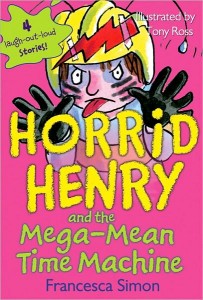 Yes indeed, Horrid Henry is at it again! Horrid Henry and the Mega-Mean Time Machine, by Francesca Simon, offers four more horrid stories for Henry’s k-5 and middle grade fans to read, laugh at, and marvel over.

First, Henry is aggravated because his parents take their family to the country for a walk. Henry feels he already gets enough exercise walking back and forth to the television, but his parents have other things in mind. Henry is his horrible-best on this family’s outing.

Next, Henry uses his mega-mean time machine to travel to the future. When Peter insists on using the machine to see what the future is like, Henry makes him dress like a girl and learn to speak “Ugg” language to communicate with children from the future.

In the third story, Perfect Peter plots revenge for all the horrible tricks Henry has played on him. Peter’s perfect plan works well…but only for a little while.

In the last story, Henry reluctantly accompanies his family to a fancy French restaurant. When he’s tricked into eating buttered snails (escargot), he’s sure he’s going to throw up all over the place. But Henry gets a big surprise.

I must admit, aside from the chapters on Peter’s revenge and the French restaurant, I did not enjoy this book half as much as the others in the series. In my opinion, Horrid Henry’s antics have become less “cute” and more cruel as the series progresses. Of course, Henry’s fans may not agree with me; after all, horrid behavior is Henry’s claim to fame.

In any event, this “boy book” is full of adventure (albeit cruel adventures, at times), and should round out the Horrid Henry collection well.