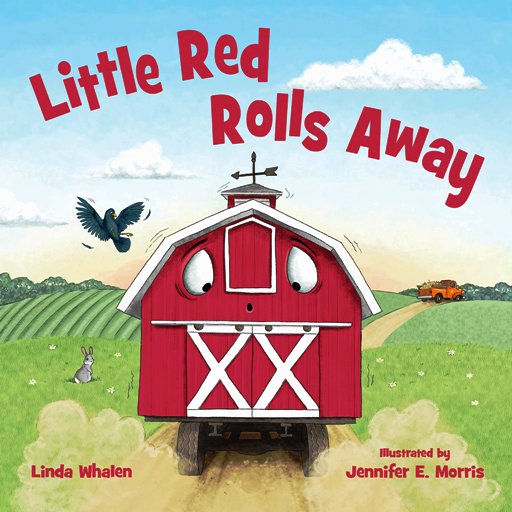 Change can be scary, so it’s no wonder that Little Red Barn is terrified when “monsters” pull him off his foundation and roll him away to who-knows-where.

In author Linda Whalen’s latest adorable picture book, Little Red Rolls Away, Little Red has been living a tranquil life on a peaceful farm. But then he awakes to the sound of…nothing! Things have changed. His friend Rooster isn’t crowing, Piglet isn’t squealing, and even Bossy the cow isn’t mooing her bossy moo.

Little Red soon discovers that his insides are just as empty as the farmyard. All the hay, grain and tools he once stored have vanished, and what’s worse, “metal monsters” (moving trucks and cranes) have come to whisk him away. Little Red is powerless to resist, and trembles as he is driven down unfamiliar lanes, floated on strange barges, lifted by powerful cranes, and transported past isolated scenery. But the worst part of all is that no one has bothered to warn him about this change ahead of time.

Little Red Rolls Away is a sweet, spot-on book about how frightening change can be. Just as Little Red wakes up to change, young children often wake up to find that their parents or guardians have made decisions during the night (or even during the day–but without the child’s awareness) and now a change is in full swing. Children of change often feel powerless to fight against the decisions that have been made for them, and tremble when familiar scenery is replaced with landscape that is new and not always inviting.

Ms. Whalen’s prose is sweet, age-appropriate and just wistful enough to conjure memories of childhood changes that once rocked readers’ worlds. Jennifer Morris’ illustrations are richly colored and kid-friendly so that the experience of being whisked away to who-knows-where isn’t too scary for young readers. In fact, Ms. Morris manages to make a barn (Little Red) seem squishy and huggable, which is definitely no easy feat.

Use this book to introduce discussions about moving to new locations, the addition of new people into one’s life, or the unfortunate subtraction (for whatever reason) of familiar people from one’s life. The book can also be used to quell fears about new friends, new schools, or simply feeling melancholy about leaving behind a life that one has known so well.