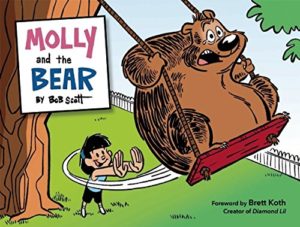 Remember the slap-stick movie called What About Bob?, starring Bill Murray? Well, Disney animation artist Bob Scott’s new picture book, Molly and the Bear, will make you ask the question: “What About Bear?”

Mr. Scott’s eye-popping, oversized new picture book is full of side-splitting strips about cuddly, adorable Bear, who meets his beloved Molly after he smells food coming from her kitchen window. He follows his nose and climbs through the window, crashes on her sofa, and ends up staying, well…forever. His new arrangements are almost perfect, except for one thing (actually several things, but who’s counting?): He’s afraid of the dark, he’s afraid of the light, and he’s also afraid of dusk, which gives him a “congested feeling.” He’s even afraid of the sound that breathing makes and asks Molly to hold her breath while she sleeps.

Yes, this bear has some real problems. He’s terrified of babies that say, “Goo!” He’s afraid of flash bulbs, dogs barking, and, oddly, being mugged while he sits in a La-Z-Boy recliner. He’s afraid to jump in water, he’s afraid to get water in his eyes, and he’s afraid to…well, you get the idea. And in addition to all these fears, Bear also happens to suffer from allergies. That’s right, he’s allergic—to his own fur! From the first page to the very last, readers will teeter between laughing at Bear and his phobias and wishing they could give him the big bear-hug he so obviously needs.

Molly and the Bear is 249 over-sized pages of good-natured fun. The text and illustrations are brimming with “yuck-yuck” humor, like when Molly tells her mom that Bear is so gentle he eats right out of her hand–then she extends an arm with a missing hand. Of course it’s hidden by her long sleeve, but Mom doesn’t know that and faints dead away. Other side-splitting moments include when Bear decides to hibernate on Molly’s sofa and a bunch of his bear friends drop by to hibernate, too. Then there’s the time that Bear tries to hit a baseball (literally HIT it…with a bat); and when Bear is confused to see Molly wearing a dress and tells her, “I thought that only old Scottish men wore those.”

Mr. Scott’s prose is sweet and funny and spot on for kids of all ages. In fact, it’s easy to see that he has given his all to this collection of adorable comic strips; that by completing this unforgettable volume of “Bear-ism’s,” he has shared his dreamed with his readers and left them smiling, fired up, and ready for more. And that’s one thing we surely can’t get enough of in this day and time: smiling, soothing, good-natured humor. Don’t you agree?